On the Edge “demonstrates clearly the love that Ed and Neil have for the music of Scotland, Cape Breton and elsewhere, with Neil's jazz influences shining through. A real gem." --Ian Green, president of Greentrax Records, Scotland 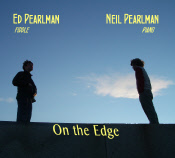 Ed Pearlman has performed many styles of music, but has specialized in Scottish/Cape Breton fiddling for 30 years. He has toured with Highland Soles, with Tony Cuffe and others; directed the Boston Scottish Fiddle Club for 18 years, directing annual concerts and festivals such as the Scottish Fiddle Rally 1985-1999 (CD on Greentrax) and Celtic Festival at Boston’s Hatch Shell.  Ed has taught many workshops and lessons, including the Blazin Fiddles camp in Beauly, Scotland, Maine Fiddle Camp, Swannanoa Celtic Week, and ran the fiddle course at Ohio Scottish Arts School for 16 years. He currently teaches fiddle in Portland Maine. A judge of many Scottish fiddle competitions (including 4 US Nationals), Ed has also played contra dances, and other styles of music. He writes the music column for Scottish Life magazine.  More details.

Laura Scott has developed the artistry of Highland dance and mixed into her repertoire Cape Breton stepdancing, Highland folk, and Scottish-based choreographies.  She has performed with Natalie MacMaster, Alasdair Fraser, Battlefield Band, Joe Cormier, Tony Cuffe and many other great Celtic artists. As a teacher she is well grounded in tradition (member of the British Association of Teachers of Dancing, and spent 30 years on the Judges Panel of the Scottish Official Board of Highland Dancing. She has taught many students privately and in workshops, including camps such as Pinewoods, Valley of the Moon, Ashokan, and others.  See videos.

Lilly Pearlman is an excellent fiddler, matching note for note with her Dad and playing sets with Neil.  She is a fine dancer and plays piano as well.  Lilly plays in Groovetrain for contra dances in New York City, and with Scottish Infusion, Neil’s band.